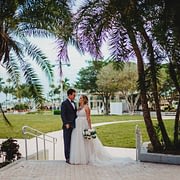 We sat down with another beautiful Wonderland Bride to get her love story.

Meet Kate and Robbie, who were married on January 11th at the Lake Pavilion in downtown West Palm Beach, Florida.

Kate and Robbie first met, but never spoke a word to each other, in 2012 out air boating in the Everglades. He was standing out on the edge of the dock at his family’s Everglades camp and saw Kate in the distance. They were both dating other people at the time. They ran into each other a handful of other times, again not saying a word throughout the following months. “We became Facebook friends shortly after and that’s all that chapter wrote”, Kate says. Two years later, in 2014, Robbie saw Kate’s ex-boyfriend, who she had broken things off with a few months earlier, out on his airboat with another girl. He figured that was his chance…. He got in contact with Kate over Facebook and it’s been history ever since.

HOW THEY FELL IN LOVE.

After talking every day for a few months, they decided to go out and officially meet. They each gathered a group of friends and met up at Renegades Country Bar. After that they hung out often, becoming “a thing”, and eventually decided to pick January 11th as their anniversary date;  11 being Robbie’s favorite and lucky number and also his college baseball number. “I knew he was the one pretty soon on. We never fought or argued and he did everything in his power to treat me like a woman should be treated. He has always had my best interest at the top of his priority list”, says Kate.

Kate and Robbie dated about 4 years before he proposed. It was Labor day weekend 2018 when they had a group of friends going to the Everglades camp. Robbie originally planned to propose in New York during Thanksgiving, but decided to pop the question here instead –  at the same place he first saw Kate when he was standing on the edge of the dock back in 2012. He proposed at that same spot with close friends and they all spent the day celebrating doing what they love; being on the airboat!

They were married at Lake Pavilion in Downtown West Palm Beach. They loved this venue because of the outdoorsy atmosphere and the fact that both ceremony and reception could be held at the same location. Navy Blue and Gold were the theme for this elegant party with a small touch of blush pink. “I love shimmer and shine so the girls were in navy sequin gowns and my dress had a beautiful glittery tulle under layer”, says Kate. The evening went off without a hitch and as it came to a close, the DJ played “Closing Time” by Semisonic. All of their guests locked arms behind one another and formed a big circle swaying back and forth. “It was so amazing to just soak in the last of the evening. The guests then chanted for Robbie and I to go in the middle of the circle and dance together. It was such an amazing close to our special day”, Kate recall.s

WB: Why did you choose Wonderland Bridal for your dream dress?

KN: I was referred to Wonderland by a girlfriend who had a great experience there. I saw WB was having a black Friday sale, so I decided to stop in. I found my dream dress on Black Friday 2018 (two months after he proposed) for a steal! We set our wedding date for 1/11/2020 (our 5 year dating anniversary) and a few months later we found out we were expecting! Back to the drawing board… After about 6 more dress hunting appointments, at both WB and other bridal shops, and a few meltdowns, my heart brought me back to Wonderland where I fell in love with a new dress that would better accommodate our growing little girl.

WB: Share your experience about your time with Wonderland Bridal.

KN: Hands down amazing! Patti, Alicyn, and Melanie were so patient with me being adamant on wanting to fit my growing belly into a form fitting dress. After talking with a seamstress, I finally decided that a form fitting dress was not most ideal. I opened my mind to try on A-line dresses. I made another appointment and went alone this time. Melanie had a few dresses pulled out for me and Patti was so sweet during my appointment. She sat on the couch for my entire appointment and was my guest and support system. I found my dream dress that day! Such amazing women that made me feel like I was family!

WB: What was the best part of your wedding day?

KI: If I had to choose one part, it was walking down the aisle and seeing my soon to be husband standing at the end waiting for me. We also shared the name of our daughter with our guests during the ceremony. That was pretty special!

WB: Any advice to future couples currently planning a wedding?

KI: Enjoy it! Don’t let the little things stress you and the single best advice…. HIRE A PLANNER/DAY OF COORDINATOR! Hands down the best decision and investment we made. The day of was 100% stress free for us and our coordinator made our dreams come to life.